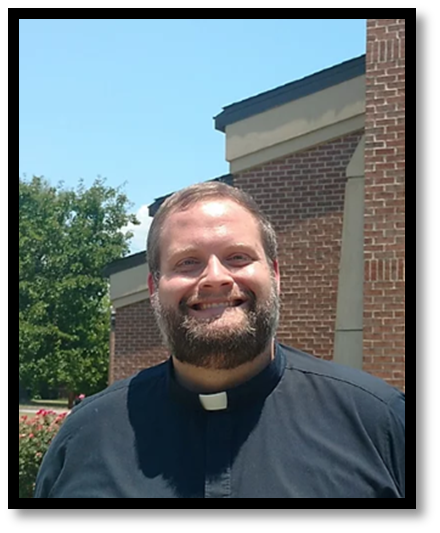 Fr. David was born in Louisville, Kentucky and is the oldest of three boys.  His family later moved to Macon, Georgia where he attended St. Joseph’s Catholic  Church  and  participated  in Mass as an altar server. He attended St. Joseph’s Catholic School followed by Mount de Sales Academy. He later attended Valdosta State University where he received a Bachelor of Science Degree in Education, with a teaching certificate in Social Studies for grades 7-12. After graduation he worked as a budget analyst at Warner Robins Air Force Base.

In 2001, he began to seriously discern his call to the priesthood when he met with our very own Fr. Brett Brannen who was the vocation director at the time. He entered Mount St. Mary’s Seminary in January of 2002, and was ordained to the priesthood on June 23, 2007, by Bishop Kevin Boland.

We are excited to welcome Father David to the Blessed Sacrament family on this Fourth of July weekend!   Please stop by after Mass giving him a  warm  welcome  and  introducing yourself and your family.